When to use Variable Speed Drive (VSD) Screw Compressors 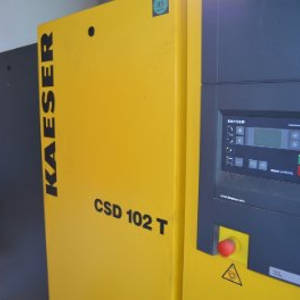 Oil-filled screw compressors are used extensively in industry, and are favoured for their large capacity, relatively quiet operation and flexibility. The latest innovation with these machines, besides the technical aspects of air-end design, is the use of variable speed drives to modulate compressor speed and hence capacity. It is tempting, particularly when making machine replacements, to buy the newest technology available, but is it always appropriate to buy a VSD compressor? The answer depends on your specific compressed air system.

The most common control philosophy employed with screw compressors is the “load-unload” control scheme. In this scheme, the compressor motor runs continuously, but may be loaded (producing air) or unloaded, depending on the discharge pressure. While an unloaded screw compressor does not produce compressed air, the problem is that it still consumes a significant amount of power – in my experience, often > 30% of the power required when on load. Running a screw compressor unloaded for extended periods of time is therefore inefficient, since energy is being consumed with no benefit in terms of compressed air production.

A VSD compressor will modulate the speed of the screws and hence the flow of air, but this will only happen when the demand for air fluctuates to levels below the capacity of the compressor. The machine therefore spends most of the time producing air (it can also go off-load or even be switched off at very low air demand levels) but using less energy than would have been used with a load-unload control scheme. The flow of air and the power required are proportional to the speed of the compressor motor. Replacing a compressor that spends all of its time on load with a VSD compressor of equivalent capacity will not save energy – it may actually increase energy consumption, given that there are energy losses across the VSD itself. You should therefore be wary of claims that a VSD compressor will save energy when the capacity utilisation of the existing compressor has not been evaluated. THERE IS NO “STANDARD” ENERGY SAVING ASSOCIATED WITH VSD COMPRESSOR CONTROL.

In addition to potential energy savings, there are further benefits to VSD compressors. They can generally be operated with smaller air receivers – I see many sites where no receiver is used at all, though generally I would not recommend this. The discharge pressure can also be controlled at a constant level, rather than having to fluctuate between two pressures, as is required for “load-unload” control. This stable pressure can extend the life of equipment, reduce the propensity for leaks and make for more consistent plant operation.

Given all of the above, it would appear to be an open and shut case to implement variable speed control where you have a poorly loaded screw compressor. But what loading would trigger the move to VSD control? One has to carry out this review quantitatively on a case-by-case basis to make the final decision. It is also important to note that VSD retrofits to existing compressors are not recommended, and that most OEM’s will invalidate the warranty on a machine with a retrofitted VSD. The input I have received from OEM’s is that VSD machines are designed to be so at inception, and that the air-ends of existing fixed-speed machines, while generally capable of operating across a limited speed range, will have reduced flexibility when compared to a VSD unit, thereby limiting potential savings. Changing to VSD control therefore typically means purchasing a replacement VSD machine, and selling your existing fixed-speed machine, hopefully for fair value. Despite the energy savings, this can be an exercise with a poor payback. So what would our other options be?

One option could be to install a heat recovery system on the fixed-speed compressor instead of pursuing VSD control. With this approach, you will recover a significant portion (often > 80%) of the input energy to the compressor, which can then be used for various applications, such as space heating, process water heating or to heat the air supply to a furnace or burner. This is generally a far cheaper option than that of compressor replacement with a VSD compressor, but can only be pursued if a suitable heat sink exists. It means that while a load-unload control philosophy may cost you more than is necessary in terms of energy use for compressed air production, you can nevertheless recover most of this energy. The recovered energy will either reduce your electricity bill or can result in reduced demand for energy carriers other than electricity, such as boiler or furnace fuel, depending on the heating application. The economics need careful consideration when the heat is used to replace that provided by fuels that are significantly cheaper than electricity, such as coal.