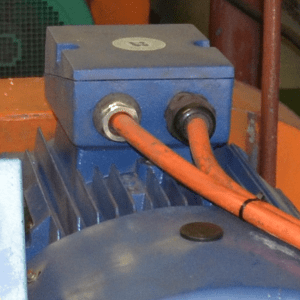 Variable speed drives (VSD’s) are used in conjunction with induction motors, and exploit the fact that a motor’s speed is proportional to the frequency of the power supply. By varying this frequency, VSD’s change motor speed, unlocking much-enhanced process capability.

VSD’s may be used in feedback loops such that motor speed is varied in response to a process variable, or alternatively, via manual variation of the frequency setting by an operator. There may be many process-related reasons for wanting to vary motor speed, such as varying the flow rate delivered by a pump or the speed of a conveyor on a packaging line. Essentially every motor-driven process can be made more flexible through the use of VSD’s.  They therefore have a core purpose other than to drive resource efficiency. There are however many VSD applications that are linked to resource efficiency, and in many cases the financial benefits easily justify the cost of the VSD. I’ll cover a few examples in this post.

Motors that run at a fixed speed often drive machines with variable process loads. The driven machine is generally sized to cope with the “worst-case” conditions expected, meaning that for some operating scenarios it will be oversized. A simple example would be a pneumatic conveying system used to transport solids of varying densities. The fans/blowers for such systems would be sized to deliver an airflow suitable for conveyance of the heaviest product handled. Use of a VSD would allow the fan motor speed to be reduced for lighter products, saving a significant amount of energy. For some machines the “oversizing” problem is partially addressed by the operation of the machine, as I explained in a previous post regarding oil-flooded screw compressors. While an oversized machine may start and stop in response to load (or load and unload in the case of a screw compressor), leading to some savings, VSD’s can reduce energy consumption even further, despite continuous operation, and can also reduce demand charges.

In pumped systems (and here I refer to centrifugal pumps) VSD’s can play a significant role in reducing energy consumption. A system employing a control valve for flow control introduces a pressure drop, which then requires the pump to discharge at higher pressures for a given flowrate. Since hydraulic power is the product of head and flow, the higher discharge pressure results in increased energy consumption. Use of a VSD would enable the pump speed to be reduced as required and the valve to be removed, resulting in a lower discharge pressure while still achieving required flow. As with fans, centrifugal pumps exhibit a proportional relationship between speed and flow, but a cubic relationship between speed and power. Small speed reductions have small impacts on flow with large impacts on power requirements. This can be exploited for systems such as cooling water circulation loops, cooling tower fans, extraction fans, product pumping systems and others. One caution here is to avoid VSD’s in systems where total head is comprised primarily of static head, since this can move the intersection of the pump curve and the system curve to a point of low efficiency.

The impacts of VSD’s go far beyond savings on the driven induction motor that is equipped with the VSD. When VSD’s are employed in integrated systems, the benefits can be enormous. A simple example would be the control of the quantity of material dosed into a process stream, which may be varied by varying the speed of the dosing pump. When used in conjunction with a feedback loop which incorporates the measurement of concentration (or a variable such as conductivity), material usage can be optimised, significantly reducing cost. A simple application that comes to mind is the dosing of chemicals into Clean-In-Place (CIP) units in the food processing industry. This not only reduces chemical costs, it also reduces product contamination risks. VSD’s can also be used for some painting or coating operations, where workpieces are rotated and the speed of rotation, in combination with application rate/flow, determines application thickness.

These are only a small sample of potential applications for VSD’s. They are an indispensable tool for factories seeking to reduce their resource footprints and emissions profiles. For large, continuously-operating motors the energy savings arising from their use can be substantial, but one should also investigate their potential for material usage reduction. In my experience these savings can be multiples of energy savings, and typically have a far larger life-cycle emissions impact.